Four years after the U.S. Supreme Court shook the patent world with its string of subject matter eligibility cases, the U.S. patent system still lacks firm footing on what constitutes patent eligible subject matter. While the court’s decision in Alice Corp. Pty. Ltd. v. CLS Bank International[1] gave rise to the two-part test for subject matter eligibility, the actual implementation of this test, and guidance on how to meet it, was left to the U.S. Court of Appeals for the Federal Circuit.

In numerous cases, the Federal Circuit has addressed this issue. However, instead of focusing solely on the claims, the court has developed a pattern that equally relies on the teachings of the specifications. Specifically, Federal Circuit cases finding claims subject matter eligible feature a clear recitation of the problem in the art, the solution posed by the claimed invention, and the benefit derived by the claimed invention, as shown in the table below: 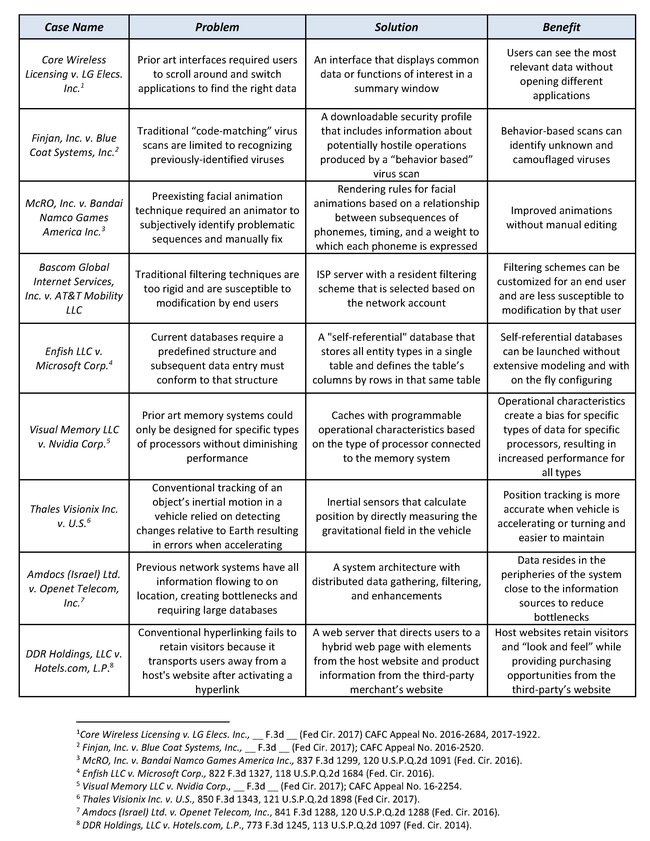 With this pattern in mind, specifications should be drafted to clearly describe the problem, solution and benefit of the claimed invention. While simple in theory, to avoid conclusory statements, failing to describe the technical solution, or properly rooting the solution in computer technology, a methodology should be used that focuses on systematically identifying the following components:

As a brief aside, in order to ensure that the described methodology is not itself too abstract, these problems, solutions, and benefits will be discussed in relation to a hypothetical invention. The hypothetical invention is a social media application that delays the delivery of a message based on the sender being in an earlier time zone than the recipient. For example, if the sender, located on the East Coast of the United States, sends a message at 9 a.m. EST, the recipient, located on the West Coast of the United States, receives the message at 9 a.m. PST (instead of 6 a.m. PST, when the message was sent). In this hypothetical, the prior art consists of social media applications and computers that transmit messages instantaneously.

Finally, to provide additional guidance on implementing this methodology, the discussion of each component also includes a suggested placement in the specification. While the placement of the five components may vary, it may be helpful to adopt a standard format to ensure that components are not missed and are clearly described.

Application of the Methodology

When applying this methodology, the five components should be identified prior to beginning to draft an application. This is particularly important in that one or more components may need to be fleshed out with the inventor, or a prior art search may need to be performed to determine how “conventional” systems operate.

The specification should begin with a discussion of the abstract problem. The abstract problem may be an economic problem (e.g., how to retain customers, how to increase profits, etc.), a social problem (e.g., how to enable people to better communicate, how to increase a user’s experience, etc.), or an otherwise high-level description. For example, in the hypothetical, the abstract problem may be, “how to improve communications between users at remote locations.” Notably, this problem is not tied to computer technology. That is, the problem existed before computers and still exists today.

Ideally, only the abstract problem should be discussed in the background section of the specification with the remaining components introduced in the summary section (as discussed below) to limit the admissions regarding the state of the prior art, and any motivations that could be derived therefrom, that may be used against the claimed invention. The background section should then conclude by directly stating the abstract problem.

The solution to the abstract problem should be stated in the topic sentence of the summary, and introduce the medium upon which your claimed invention is implemented (e.g., mobile device, social media application, etc.). For example, in the hypothetical, the first sentence of the summary may state, “Methods and Systems are disclosed herein for a social media application that improves communications between users at remote locations by delaying messages sent from users in earlier time zones.” Notably, it is the implementation of the solution to the abstract problem in this medium (e.g., “a social media application”) that creates the technical problem.